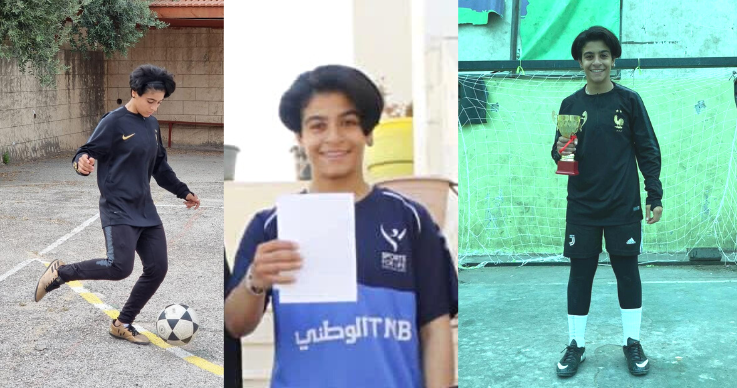 This is my story that is living proof on how nothing is impossible in the world of football and no obstacle stands in the way of dreams for fans of this game.

My football journey began when I decided to start playing with my brothers football at home as well as in the neighborhood I live in. I started to also play football in my school team and in the School Football Leagues (tournaments between schools across Palestine). Me and my fellow teammates from my school team participated in the School Football League in 2018 and we had won first place. This accomplishment that came from many hours of training was the beginning of my deep passion and pursuit in making football my career. I decided to join the Sports for Life football team when my friend invited me to join –  this was a strong driving force in developing and fine-tuning my skills.

After some trainings with the Sports for Life team, I developed many life skills and technical skills in football in a short period of time. My personality changed, I became more confident and I began to enjoy working in a team. I became committed and devoted to the training sessions with the Sports for Life team and I also found myself practicing new skills at home by watching videos and replicating the moves of professional players. I really enjoyed watching competitive football matches for international football teams such as Real Madrid against the various teams in the league – this helped me watch the skills of the best players.

In my football journey, I have faced many difficulties because of society’s negative view on girls playing football. Many looked down upon me playing football and tried to convince me to quit but I was able to prove them wrong by showcasing my skills as a great football player and participating alongside my Sports for Life team in the 11th Women’s League. I was positioned as a striker and a right-back for the team, and scored the first goal followed by many other goals during the tournament. I have been labeled the MVP of the Sports for Life team and have consistently excelled in my play.

For October of 2022, me and my fellow teammates at Sports for Life were selected to participate in representing Palestine in the Street Child World Cup in Qatar. I know this will be one of the most memorable experiences and accomplishments of mine to come yet. Palestine Sports for Life has opened this opportunity for me to showcase my skills to an international platform and I am beyond thrilled.

Football for me is not only a game, but it is my way of expressing myself to the world and to tell my story through it. I will work hard now and in the future to reach what I aspire to be since I was a child, and that is to be a well-known football player at a local and international level and to join the international women’s team.

info176Palestine: Sports for Life (PS4L) is a leading Palestinian non-profit Sport for Development organization based in Ramallah founded in 2010 PS4L responds to developmental needs in the marginalized Palestinian communities through sport and life skills and empowers youth and women by operating in a global context and aligning it’s developmental activities and programs with the United Nations Sustainable Development Goals (SDGs).